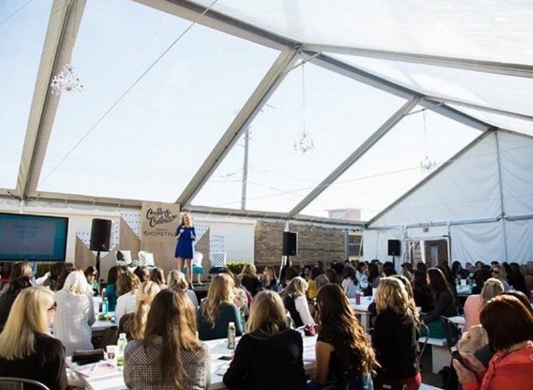 I had my mind blown on a boat ride off the coast of Lembongan, an Indonesian island. It wasn’t because the sun was setting on the water creating the most majestic starburst of reds and oranges. And it wasn’t from my total awe watching friends crushing it on an epic wave. Nor was it from the creep of a boat driver that would later pull a knife out on all of us.

No. My mind was blown by a simple piece of advice: Assume everyone is into you until you’re proven otherwise.

As soon as I heard it I knew my life would never be the same. A lovely man named Dave told me this was his secret to dating. That anytime he was around women, he assumed they were alllllll into him until he received signals that proved otherwise. Dating shmating, I knew instantly this was a universal secret to confidence.

Think about the times you get the most down on yourself….

When you walk into a room of fashionable women and instantly think they’re judging you for not being as cool or as trendy. And then it’s not until someone makes you feel comfortable or compliments your shoes that you’re able to put some pep in your step.

Or with the opposite sex. Unless someone is outwardly flirting with you, you don’t think anyone’s “feeling you.”

And then there are interviews. You always think you bombed until you get the offer.

Team meetings? Pretty sure they think your ideas are dumb until you’re outwardly validated.

^^ It’s all so backwards!!! How different would all the situations in your life be if you just assumed everyone was into you? Everyone was digging what you had to say? Everybody thought you were the jam? And only when they gave you real, digestible indicators otherwise would you think differently.

I’ll tell you how different it would be. As different as night and day.

When you can go into situations with total confidence in yourself, your whole world changes. You don’t second guess every word out of your mouth. You don’t worry about the size of your hips. You don’t really give a damn what anyone thinks. And it’s not until someone is blatantly open with their dissent that you’d ever think they weren’t having what you were serving (and hint: the times that actually happens are oh so rare).

I know what you’re probably thinking, it’s not that easy. I know. Mindset shifts never are. They require a lot of self talk. And an equal amount of reminding yourself that you’re awesome. And some work on your soul to figure out why you don’t actually believe you’re as perfect as you are. The latter is all up to you. The former is where I can help.

See what space you can create for greatness when you start believing everyone likes you until proven otherwise. My guess is you’ll step into your own. You’ll quit second guessing yourself. And you’ll be able to stay present and in the moment far better than you ever would otherwise.