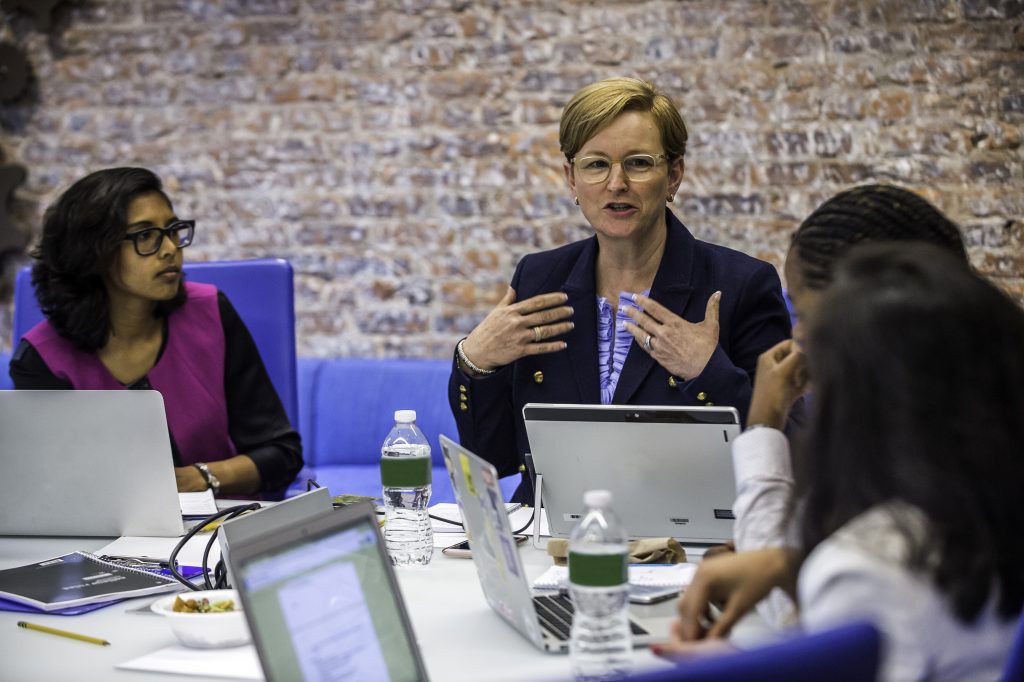 Is there anything more powerful than a group of women determined and unwilling to accept the status quo? No. Not ever. We’ve seen it in the stories of history, we’ve seen it on the screens of Hollywood, and we’ve seen in it the headlines of today. When women are on a mission, there’s no stopping their force for good.

There are groups of women everywhere doing incredible work for the world at large – especially Women in Tech. And thank goodness, because the technology workers of today are shaping the future of tomorrow. We want that future world to have an equal amount of diverse, female voices be a part of it.

A champion of this work is Julie Elberfeld, Senior VP of Shared Technology and Executive Sponsor of Diversity and Inclusion in Tech at Capital One. When I first met her last year on the grounds of Grace Hopper, the largest gathering of women in tech, I knew she was a force not only for the industry she was a part of, but for every young woman who dared to dream of solutions to today’s problems.

Julie began her career in technology when there was no term for being a woman in technology. There weren’t dollars funneled to the cause. It wasn’t a line item on a corporate priority list. And it sure as heck didn’t get the attention and focus that it gets today. Mainly, because there wasn’t a representation problem per se. When Julie entered the technology workforce, she was surrounded by women – it was the peak of representation at that time –37% of computer science degrees were acquired by women and women made up 40% of tech workers. That figure is now around 18%.

As Julie rose through the ranks and the women in the room with her dissipated, she thought it was the typical fallout that industries experience across the board as women rise into positions of leadership. There’s just less of us. It wasn’t until later that she realized an even bigger issue – not only were the women not at the top of technology, they also weren’t coming up from the bottom. There was a pipeline problem. That realization came from courageous women on her team. They spoke up, and showed her the data of what was going on in the industry, complemented by their friends’ anecdotal stories of just how tough it was to be a woman in tech at other companies.

Thanks to them, Julie decided she was going to leverage her leadership position to bring people together and try and solve this. “When I had that realization, I actually had tears in my eyes. I felt I’d had the most amazing experience and opportunity to influence technology. So, it was very sad for me that young girls were going to be told a very different story.”

Instead of sitting in her disappointment, Julie took action. “I decided right then and there that this wouldn’t be the case. It’s unacceptable that young girls were going to be told that this wasn’t a place for them. I was going to do whatever I could personally do to shift this and I was going to ask Capital One to come on that ride with me. I already knew we had a different, more inclusive culture. And we were going to give back.”

So in the summer of 2014 when headlines streaking across major news outlets were showcasing the problems of representation in technology, Julie was huddled together with a group of 19 women brainstorming ideas for how to immediately start making a difference both for the industry and for Capital One.

“We’re good engineers,” she shared. “We sat there and said we must be able to engineer a solution.” That they did. One proposal, some internal pitching, and full support and funding from the Capital One leadership team later, Julie had a full-blown initiative on her hands.

What started as a grassroots effort of 19 women and a fearless leader has morphed into a leveraged and executive-supported program that is not only about Women in Tech, but the entire diversity and inclusion needs of the industry. Capital One is a founding sponsor of Women Who Code, multi-year sponsor of the Grace Hopper Celebration of Women in Computing, launched several successful WIT Demo Days and is hosting the Women In Tech Experience with Virginia’s Secretary of Technology this month for more than 2,000 women in Richmond, Va.  Thousands of people have been involved and Capital One’s Women in Tech initiative has become a successful model for other companies.

The decision of one can impact the lives of many. And whether we realize it or not (because the current culture is proving just how much social media algorithms and mainstream news coverage love a salacious and negative story), there’s powerful work being done by determined women like Julie and her team – but we’ve all got to do a better job telling those stories and seeking them out.

Those stories showcase representation. Those stories show us what’s possible. And those stories help shift the narrative so women have both the examples and the support to keep paving the way to continue on our own mission. Because as Julie explained to me, we’re on the cusp of a digital revolution, especially with Artificial Intelligence and we are badly in need of diverse perspectives building those models and giving their input]. We need more women building the future. And we need stories of inspiring, mission-driven women to help get us there.

Working around tech and women’s leadership, I’ve seen firsthand how important having women at the helm of the future of innovation is, which is why I’m proud to partner with Capital One to create this post. These are my opinions, obviously. Learn more about Capital One’s WIT experience here.